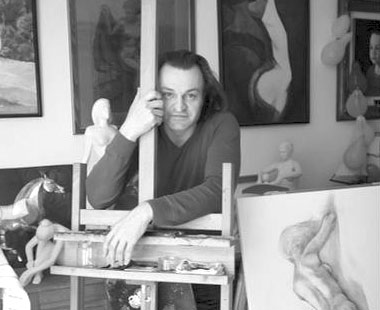 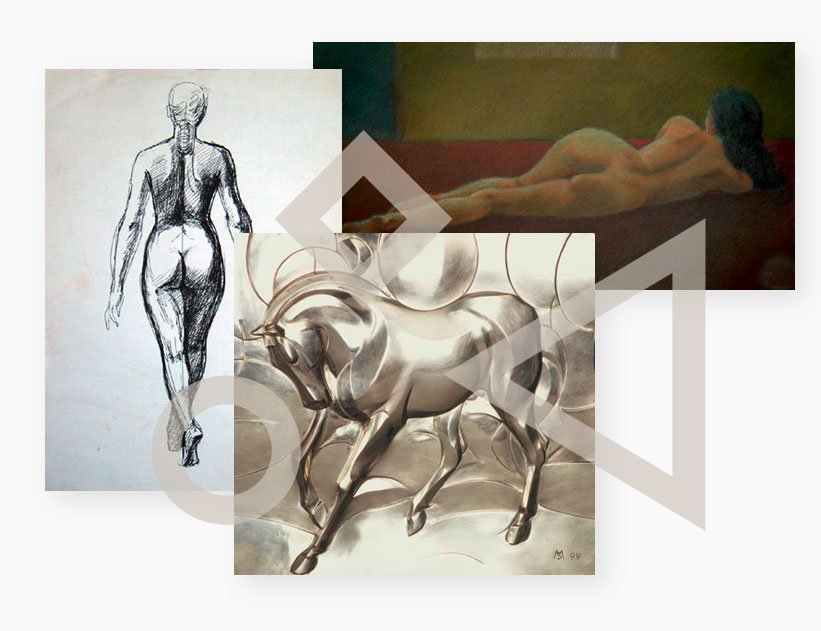 Approach to the sculptures and paintingsby Mladen "Sime" Simunovic

Mag. sci Enes Quien, Professor of Art History at the Academy of Fine Arts in Zagreb

Simunovic also paid intensive attention to painting and drawing. He works on a dualistic level painting nudes: on one hand he detects in the display of a female body several different constellations for rotating, turning and varying the position of volume, form and color in the becoming of structural variations of compositions. On top of that it is a personal hommage to the secret and mystery of the female. In regards to color the artist paints also two variations of nudes: he painted one part of the nudes in blue tones with white accents transmitting the impression of the voluminous and sensual beauty of female bodies. The other part of the acts he painted in reddish and yellow ocher tones. In the same way that he uses white accents in the blue-colored nudes he uses specks of lighter yellow accents in order to give volume and to achieve the three-dimensional plasticity of the work. Thus the anatomy of the body is expressed by a fine glow on the rounded voluminous forms, and creates the cohesiveness of the embodiment. With sure touch the artist paints nudes in a gesture full of verve but without losing control or rationalization. It is obvious: the artist understands how to separate the background from the figure and to layer the plains with rigorous contour. The depiction of the female figure emerges against the background. This leads to a planned division in the colorstic unity. In this way he achieves maximum simplicity, but also an effective illusion of the third spatial dimension that reveals his primary nerve and mission as a sculptor since the painted nudes are suggestive of being sculpturally imagined and executed. In Simunovic’s painting as in his sculpture the body becomes painting or sculpture and, vice versa, paintings and sculptures become bodies infused with always refreshed inspiration. In the creation of painted nudes Simunovic proceeds in the same way as in the formation of sculpted nudes: he paints according to a model and also upon the universal pattern that escapes from his imagination, and attains his highest aesthetic level of refinement. In the search and finding of artistic solutions he finds and fundaments the substance of artistic Truth, principally embodied in the requirement of a precise structure, in which beauty reflects itself... A secretive character appears differently in a female body; nevertheless the answers are always the same, as those of the Sphinx, because the oneness of the mysteriousness will be however secured through deception. All these thesis are valid for the artistic quest since all scientific knowledge of the women‘s external macro and internal micro biological-anatomical structure are trivial in front of the artistic interpretation in her modernity and present time. If deception is truth, it continues being thus also a puzzle, but one may start from the fact that the truthfulness in an artwork is anchored in subjectivism, vision, illusion and appearance. Therefore female nudes in the painted version, as well as in sculptural nudes, emerge from a scheme absolutely clear, mimetic, natural and figurative, related to the reality and confirm the internalized experience: the artist’s subjective and delusory Vision.